In attendance, on this special day, were Lee Steinberg and representatives of her family- Riva Shar and Sevie Samuels. Also present were Dudi Roth, President of American Friends of Meir Panim, Moshe Y. Lefkowitz, Director of Meir Panim, Beni Kiryati, former mayor of Tiberias and staff from Meir Panim branches located in the Tiberias vicinity.

The festive lunch, prepared by Meir Panim chefs, was preceded by a delightful dance performance given by participants of Meir Panim’s after school enrichment clubs. The girls performed traditional dances to the delight of all in attendance. Dudi Roth, President of American Friends of MP welcomed everyone and made reference to the fact that it is the Rambam, Maimonides, whose grave and memorial is located only blocks away from the Free Restaurant, who taught that the highest form of charity is to help sustain a person in a dignified manner. That is what Meir Panim strives so hard to do. Dudi continued to say that “In this particular Meir Panim restaurant there is no doubt that the highest form of charity is being reached. People come in burdened and drained and they leave after a hot meal and a kind word feeling strengthened and proud. What greater way can there be to memorialize beloved parents than by making their name synonymous with the highest form of charity?”

Beni Kiriyati, former mayor of Tiberias, spoke of the significant contribution Meir Panim has made to the city of Tiberias, a city with a population of 40,000. Tiberias has been suffering through a recession in recent years and the Second Lebanon War in 2006 aggravated the situation, forcing businesses to close and reducing the number of available jobs still further. Hundreds of workers, among them parents and breadwinners, new immigrants alongside long-time residents employed for decades in the same plant, have found themselves jobless. The decline into poverty has been frighteningly rapid; many in Tiberias can no longer pay for basic groceries. This living situation has brought many families and their children to a state of deterioration in their living standards and to real poverty. Among this population are also many elderly who find it very difficult to support themselves in a dignified manner. Meir Panim and the Tiberias municipality have begun to make inroads to help the needy of the city – the soup kitchen feeds hundreds of people a day and after school children’s clubs help educate the next generation for a better future.

Local volunteers and a number of diners expressed their appreciation to Lee Steinberg and to Meir Panim. We all wish Lee many years of good health and look forward to seeing her and her family back in Israel and in Tiberias. 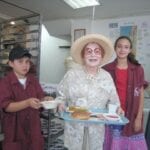 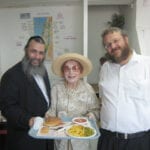 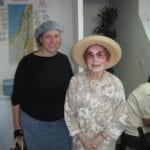 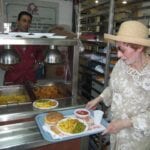 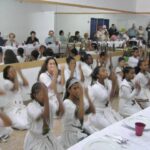 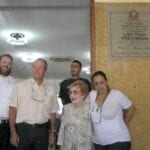 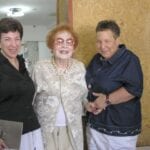 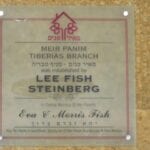