A few weeks ago, Lt. Netta Betat from the Shomron Regional Brigade called me with a request to help surprise one of her soldiers- Corp. Yaniv Grama. Yaniv, a lone soldier who had been given a room on Kibbutz Givat Oz, which is near the Megiddo Intersection and his brigade. Sharon, the brigade sergeant was planning to surprise him by refurbishing and fixing up his apartment with the help of the unit’s soldiers.

It was impossible to ignore such a unique request. I especially liked the idea of the brigade’s soldiers working together to help the soldier. I personally contacted the managers of the Power of Giving warehouses in the Haifa and Yokneam regions. After explaining the situation, I asked for their help in obtaining furniture and electric appliances for the soldier. Ms. Kochava Rosenfeld, the Yokneam warehouse manager was very excited by the concept of this surprise project and enthusiastically joined the team. Everyone combined efforts and worked together to renovate and paint the apartment, hang curtains and put in carpets and furniture.

On Thursday, Nov. 22, 2007, Yaniv was released for a weekend leave from the army. When he arrived at his dark apartment with a friend from his unit, Yaniv did not suspect a thing. When he opened the door and turned on the lights, Yaniv was greeted with applause. Inside, his Operations Unit Commander was waiting for him, together with his personal commander, fellow soldiers from his unit who helped renovate the apartment, IDF Lone Soldier Project in the Kibbutz Movement Director Tzvika Levi, overseer of lone soldiers’ apartments and kibbutz member Yechiel, and Association for the Wellbeing of Israel’s Soldiers (AWIS) Chairman and volunteer Gidon Cohen, who both arrived especially from Jerusalem for the event. Presiding over the entire surprise operation was Sgt. Sharon.

It is difficult to express Yaniv’s surprise and excitement and the thrill felt by all those present when he walked in. After speeches and a “L’Chayim” toast to everyone and to Yaniv’s success, the soldier received an additional gift from AWIS and the Kibbutz Movement.

Everyone present agreed that the united group effort and cooperation contributed to the successful results! 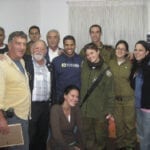