A festive week for the children of Or Akiva, with Israel’s national soccer team: Yesterday, 20 children from Meir Panim were privileged to have a special meeting with the soccer players from Israel’s national team. The team met this week for the European League Championship 2012 preliminaries, bringing the entire team and staff to Ramat Gan.

Meir Panim and the Lechem Foundation, organized the very special meeting for the children with the soccer stars. The players signed soccer balls that were distributed to the kids, posed for pictures with them and handed out food vouchers for the upcoming Rosh Hashana holiday. At the end of the meeting, the children watched the team train for their upcoming game against Malta, which will take place this Thursday.

Meir Panim is working hard in preparation for the new school year. Over the past few weeks Meir Panim and Keren Lechem have been distributing new schoolbags filled with school supplies. “This year too, we distributed backpacks with all the supplies they will need, and succeeded in getting the children of our city to smile on their way to begin the new year,” said Ilanit Hafuta, of Meir Panim in Or Akiva.

* This article is a translation of a news article which first appeared in Israblog on August 8th. 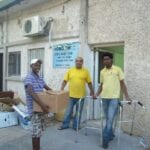 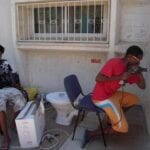