The family of four arrived for the lunch “rush hour” and quickly rolled up their sleeves and got to work. The boys and their father served patrons while Lynn prepared trays for the continuous influx of diners. In the few hours that they worked, the Dribens served well over 100 diners and for each one they had a smile and a kind word. According to Lynn, “the visit was one of the most memorable activities during our trip to Israel. We have received updates about Meir Panim over the years. However, serving at the free restaurant gave us such a better appreciation of the day-to-day struggles of your patrons as well as the wonderful efforts of the staff and volunteer workers.”

The Meir Panim Free Restaurants have become major thoroughfares as demand for food services has risen during this economic downturn. Nicole, the manager of the Jerusalem branch, told the Dribens that demand in her kitchen has risen by nearly 50% in the last few months. She tells of a new phenomenon where people are requesting additional food to feed their children since there is nothing at home. One young lady, about 15 years old, Nicole pointed out to the Dribens, was waiting patiently for all the diners to leave so she could collect food for her younger siblings who were waiting at home. It is absolutely heartbreaking, Nicole said with tears in her eyes, to see that her ‘restaurant’ is the busiest business around. 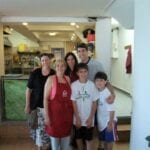 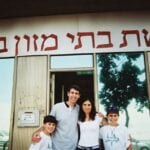