After two hours of standing on their feet and acting as busboys/waiters/social workers one might have expected a different reaction, but Elgie and Barbara Gibson finished their volunteer shift eager to return and work some more.

The Gibsons, from Seattle, Washington, were encouraged by a good friend to visit Meir Panim and see another side of Israel, the side that is often overlooked when visiting Israel. Eager to get to know the country and all its aspects, the Gibsons followed their friend’s advice and showed up at Meir Panim not only to see but also to help. After two hours of work and interacting with the dedicated volunteers and the Free Restaurant diners, the Gibsons were convinced that not only had they had received more that than they had given, but they also had had “the best time ever”. 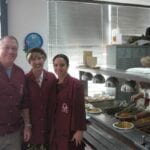 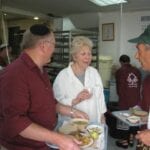 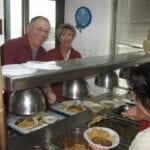