Meir Panim was honored to host former President of Germany Christian Wulff in its Tzfat Restaurant-Style Soup Kitchen, located in the northern region of Israel.

President Wulff, a longtime politician, served as Germany’s president from 2010 to 2012. He was the nation’s youngest president, and is also an attorney. He currently works as a business consultant while dedicating much of his time to philanthropic causes.

Wulff, a staunch and longtime supporter of Israel, had previously visited the country while in office in 2010. His recent visit to Meir Panim was coordinated by Senator h.c. Michael Keller, dedicated board member of Manna Meir Panim UK. 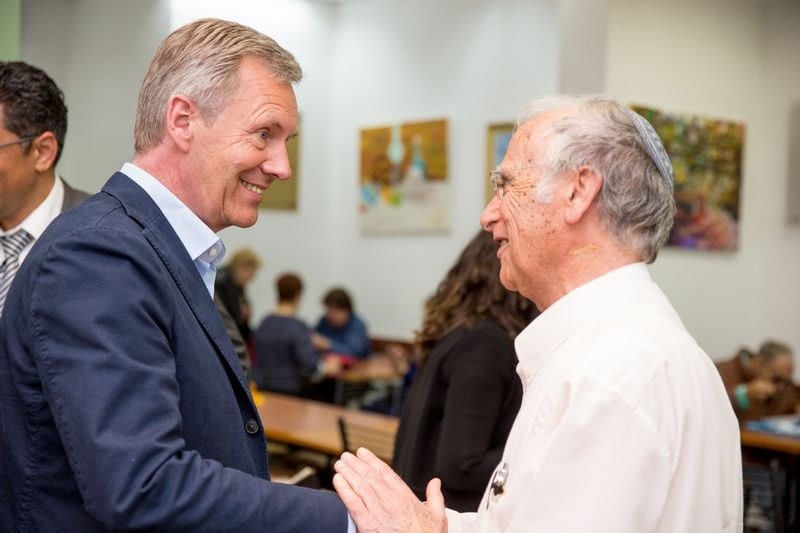 Germany continues to be one of Israel’s staunchest defenders and most dependable allies. Germany’s foreign policy is clear on its position of Israel’s right to exist. In light of Israel’s geographical position as a democracy in the region, Germany’s support has been consistent. During his time at the Meir Panim restaurant in Tzfat, Wulff demonstrated his continued commitment to the Jewish state and referenced the strong relationship between the two countries.

President Wulff spent much of the day at the restaurant, discussing its operations at length with Branch Manager Benny Elgad, and was able to learn about all of the ways this small center provides an essential lifeline to many struggling Tzfat residents. The restaurant is unique in that it is not a typical soup kitchen: the diners are seated and served by volunteer waiters like in a regular restaurant and provided with hot, nutritious meals in a dignified setting.

Elgad pointed out that the restaurant welcomes anyone who walks through its doors, regardless of their race or ethnic background. It serves as a true cornerstone in the Tzfat community, as a place where anyone who is hungry can find a hot meal and a friendly face. “It was a true privilege to speak with President Wulff,” remarked Elgad. “He spent hours here at the restaurant and really dedicated his time to understanding how critical this facility is to the residents of Tzfat. In fact, he was so inspired by Meir Panim’s work that he made a point to speak to the diners one-on-one and hear their stories. Without a doubt, he saw how special our work here is.” Elgad was so moved by President Wulff’s visit that he was in tears. “It’s not every day that we get an opportunity like this, to have such a distinguished leader among us,” he said.

The demographic of Tzfat’s Restaurant-Style Soup Kitchen is predominantly elderly residents, many of whom have turned to the restaurant as a resource to enhance all aspects of their daily lives. As most of them live on fixed incomes, they have little money for food and even less for recreational activities. Many have no family members or friends outside of the restaurant to socialize with, so the restaurant turns into a “second home” of sorts for them. The space is utilized for additional activities and programming, including speakers and workshops on subjects such as budgeting and Jewish learning.

One of the distinguishing features about this branch in particular is that the diners – specifically a group of Holocaust survivors – have coalesced to form a choir. As befitting the occasion, the group welcomed President Wulff with a special musical performance.

Following President Wulff’s visit, the restaurant diners were touched to learn that the world has not forgotten them. “It made me feel so good inside to understand that we are not alone,” said Elsi, a 95-year-old Holocaust survivor who visits the restaurant for lunch every day and always takes home a container of food so that she is able to eat dinner. “I just don’t know how I would get by without Meir Panim’s restaurant and it is really an honor to have a visit like this.”