As part of an experimental program to assist the aging survivors, 1000 survivors will receive magnetic cards with which they will be able to purchase food in time for Passover.

The new card, developed with Meir Panim, will be loaded with 300nis a month for one year. During this year, recipients will be able to purchase groceries (excluding alcohol and tobacco) in the major food chains.

Irena Faver, an 84 year old survivor of Auschwitz and currently a resident of Nazareth Illit received the food card this month. “It helped me buy things I couldn’t afford before, like meat, without thinking about it too much” she said to YNET. “It is a very good idea and it is too bad that more survivors can’t benefit from it”

Solly Armon, director of projects in The Company for Restitution of Holocaust Victims Assets – an NPO that works in cooperation with welfare organizations –explained in a conversation with YNET that there are differences of opinions as to the best response in the care of the needy. “In some cases, the elderly are also very lonely and therefore it is more appropriate for volunteers to distribute food packages and visit them to their homes.” she says.

On the other hand, when Holocaust survivors receive a card in the mail and take it to the supermarket their dignity remains intact – they can also choose groceries that they really need or want.

Faver was taken to Auschwitz when she was 17 years old. She is the only survivor of her family. She emigrated from Romania after her husband died and she was over 55 years old. One of her children joined her in Israel but subsequently died from cancer. When she arrived in Israel, Faver applied for a pension from Germany but, she says, she was missing some documents and was not eligible for aid from Germany or any other organization.

“I should have received a pension form Germany because I worked for them but Israel didn’t fight for me. It doesn’t matter anymore – I don’t have much time left anyway” she says sadly. “I receive Social Security from this country because I arrived as a pensioner and I am used to surviving on what little there is. At my age you don’t need so much and I also don’t eat much. I buy inexpensive things. Now, with the card, I can buy a little more.

Adapted from a YNET article written by Yael Bardovsky. 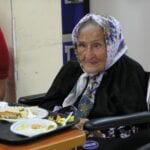