Her tour began volunteering instead of touring, and she volunteered at one of the Meir Panim facilities in a kitchen. After seing the need, she decided to dedicate a toy drive to Meir Panim Relief Centers. She put up flyers all over the school asking for donations, and asked that announcements be made during regular announcements each day. She was supervised by a teacher named Mrs. Rachel Gerstley. The toys were delivered to Meir Panim in Jerusalem on Chanukah. It included over 50 new toys, delivered in suitcases.

The toys were immediately transferred to our warehouse and distributed to needy children, who were absolutely delighted with the toys, and the message of friendship it brought to them in honor of Chanukah. 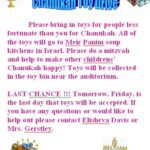