The visit included the participation of the students in a “Kindness Day” in which they enthusiastically volunteered in Meir Panim’s soup kitchen in Kiryat Malachi and packaged thousands of hot food portions for children in the local Netzach Yisrael School.

Later, these guest students, dressed in shirts and hats with the Meir Panim logo, marched from the soup kitchen to the Netzach Yisrael School where they participated in a moving Bar/Bat-Mitzvah ceremony for the children of both schools.

Netzach Yisrael was decorated in honor of the event, and the school’s students, who are mainly of Ethiopian descent, celebrated with their Belgian brethren to the accompaniment of DJ music. Each one of the children from the two schools found a partner from the other group, and together they danced, became friends and exchanged good wishes and gifts. The ceremony included an enjoyable quiz on the topic of Israel’s Independence Day in addition to a group sing-along.

Meir Panim’s Executive Director Moshe Levkovitz, Rabbi of the Tachkemoni School in Antwerp, Rabbi Amir Edrei and the principal of the Netzach Yisrael School Ayala Hag’ag reported that the event was moving and special and that they are looking forward to the traditional visit again next year. 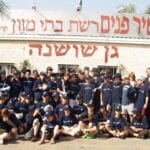 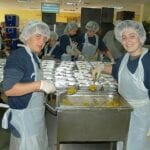