The Bar-Mitzvah ceremony left a powerful impression which will not be quickly erased from the memories of its star participants, members of the Ethiopian community who come from complicated family backgrounds and live under difficult circumstances

After receiving a gift from Meir Panim – an ornate set of Tallit and Tefillin- the Bar-Mitzvah boys donned these items and set out on a celebratory parade accompanied by their families and the entire student body. Amidst joyful singing and dancing, this large party of celebrants marched from the school to the Central Synagogue in Kiryat Malachi where the boys were called up to the Torah for the first time.

Parents and children from the local community also joined the celebration and brought trays laden with treats for all those present.

At the end of the religious ceremony, the participants returned to the school, where they were treated to a lavish meal courtesy of Kiryat Malachi’s Meir Panim soup kitchen run by Mr. Adi Parchan, the branch manager and Eli, the dedicated chef. During the meal, the Bar-Mitzvah boys delighted the participants by reading their moving Bar-Mitzvah speeches. The famous singer Daklon made a volunteer appearance and warmed the hearts of the celebrants with his songs.

It was apparent from the enthusiastic dancing that the students and teachers alike were glad to be part of the festive mood which permeated the school.

According to Ayala Hag’ag, the school principal: “It was a powerful event filled with holiness, loving-kindness and excitement, and words are insufficient to describe it…” 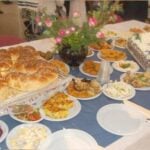 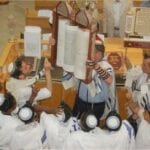 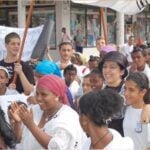