Science has a few answers to this long-term interspecies friendship. As the Mayo-Clinic explains, “Animal-assisted therapy can significantly reduce pain, anxiety, depression, and fatigue in people with a range of health problems.” 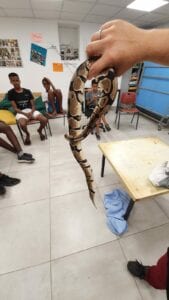 Sadly, in Israel, those living close to the Gaza border are experiencing many of these symptoms. Children especially may not know how to describe what they’re feeling, but after years of rockets being hurled from across the border, they know one fact: That their geographical location has saddled them with some very real adult problems.

Which is why Meir Panim offers animal-assisted therapies in their neighborhood youth centers in Sderot. There, young adults from 7th to 12th grade come to these centers after school to take part in a variety of engaging activities. It is what Meir Panim refers to as a second home; where the kids have a safe space to hang out with friends and develop critical skills for their future.

At Sderot, a mere 33 kilometers from the Gaza strip, residents only have 15 seconds to seek shelter. That means children can’t freely play outside during times of crisis and each of them must always be aware of how far away they are from the closest bomb shelter.

Day to day life is not easy. Over the past year, there were a few instances where it appeared the country was on the brink of war. During those times, when rockets indiscriminately fall from the sky, even taking a shower seems like a risky endeavor.

Meir Panim understands that this is no way for children to live. And while they can’t change the political situation, they do hope these teen centers provide children some respite and therapy to give them the treatment and attention they need. It also helps that these centers are completely fortified and serve as bomb shelters when needed. 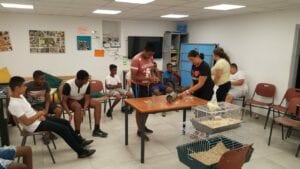 some children do not want to actively go to traditional therapy where they speak to a professional.

“In these teen centers we offer activities where we provide therapy goals for young adults not in a way that feels like they’re getting therapy,” Mimi Rozmaryn, Meir Panim’s Director of Global Development, explained. “No teen wants to hear that they’re damaged and need therapy. So these centers are a fun hangout and escape for them.”

Which is why these animal therapy outlets are so successful. By having supervised encounters with various animals once a week, amazing progress is made.

Every week, a new animal comes in. From snakes to chickadees to rabbits, teens learn about each animal’s habits, how to care for them and they get to touch them.

“Touching is therapeutic,” Rozmaryn said. “And during these sessions, they have the opportunity to touch, cuddle, feel and learn about caring for animals and the responsibility that comes with it.”

At these teen activity centers, teens do more than bond with animals. In the three Meir Panim supported youth centers, the young adults can partake in photography and cooking workshops as well.

It is the organization’s way of showing that they’re supporting this community not only when they’re under fire, but year-round.

“This is work we’re doing all the time, 365 days a year, with the Education Ministry and the municipality,” Rozmaryn said. “In times of crisis, people want to hear about Israel’s South and help. But we’re there all the time.”

Rozmaryn attributes their constant presence to developing a real relationship with the residents on the ground.

“We check in on them regularly. These long-term relationships differentiate ourselves from organization’s that offer relief emergency drives during times of crisis. We’re in touch with them, love them and give them space to grow,” she said.