Meir Panim Update
Why is this Seder Different from Those in Other Years?
January 1, 1970

“You have no idea how I enjoyed myself. Each year on Seder night I go to sleep because I have nothing to do on the holiday. But this year, I was invited to participate in the Seder that Meir Panim organized at the Caesar Hotel, and it was excellent. I felt the holiday spirit which I had not experienced in a long time…” This testimony came from an elderly woman who comes to eat her daily lunch at the Jerusalem branch of Meir Panim.

Hazor: Dozens of people gathered to partake in the Seder at the local Community Center, in conjunction with the municipality and Chabad.

Tzfat: Dozens of diners attended the Seder which was held in the Meir Panim soup kitchen, in conjunction with the Senior Daycare Center.

Acco: Dozens of people attended the Seder in the Meir Panim soup kitchen in Acco. The Acco-Nehariya Meir Panim branch manager, Mr. Yoram Hazan reported that it was “very nice and moving.”

Haifa: Hundreds of people attended. The Seder took place in the Tifferet Yisrael Hall in the Hadar neighborhood of Haifa.

Netanya: Dozens of people came to the Seder which took place in the Metropol Grand Hotel. The meal was conducted with the hotel guests.

Kiryat Malachi:   Dozens of diners enjoyed a meal in Meir Panim’s soup kitchen. The food was a welcome contribution from the IDF’s MARA 860 and Zikim bases. Additional supplies were provided by the “Chesed L’Avraham” organization.

Kiryat Gat: Dozens of diners enjoyed a meal at the Chabad House with the participation of Rabbi Moshe Havlin, chief rabbi of Kiryat Gat.

Sderot: Hundreds of diners participated in a central Seder in the Malkiel Halls, in conjunction with Chabad.

Dimona: Hundreds of diners enjoyed a meal in Meir Panim’s soup kitchen. The Amidar company continued their tradition of helping to finance the meal’s expenses. Branch manager Nissim Almekayis recalled that when the mayor of Dimona arrived at the event, he was greatly impressed and said: “It’s amazing how you take care of the needy by conducting such a nice and tasteful Passover Seder.” Almekayis added that “it was moving to hear from our clients how much they enjoyed this important evening.”

Ashdod: Dozens of Holocaust survivors enjoyed a Passover Seder that took place in the Slava Club in town. The food was donated by the IDF’s MARA 860 army base with the help of Moshe Parchan, the branch manager.

Jerusalem: Hundreds of diners participated in the Seder which was conducted at the Caesar Hotel. The following letter was sent to the Chef Shalom Kadosh who prepared the delicacies for the Seder meal.

I have no words to describe my admiration and appreciation for your generous contribution in preparing the Seder night festive meal for Jerusalem’s Meir Panim guests. It was apparent that you put your heart, soul and expert abilities into preparing an especially festive and dignified meal, from the appetizer up until the dessert.

I was present at the Seder and cannot even express in words the great delight of the participants. However, one woman’s comment made a deep impression on me: “At least once a year I feel that someone loves and takes care of me.”

In her name and in the name of all the participants of the Seder night, I extend my deep appreciation to you and your assisting staff, 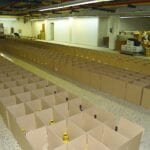 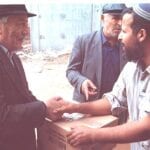 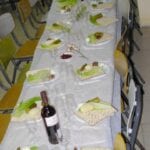 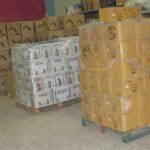 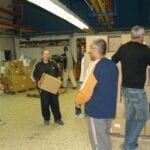 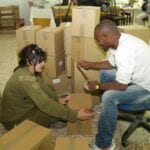 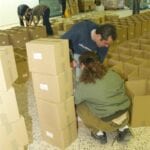