How can eating a meal in the U.S. actually feed hungry Israelis?

On May 15th, communities in New York, New Jersey, and Baltimore joined together in dining at participating Kosher restaurants to feed hungry Israelis. Each establishment agreed to donate 10 percent of the day’s proceeds to Meir Panim.

In Hebrew, charity is called “tzedakah,” which translates as righteousness. Giving to the poor is considered an act of righteousness which benefits both the giver as well as the receiver.

Meir Panim’s America Eats for Israel program has been an annual event for over a decade, raising thousands of dollars each year for Israel’s needy citizens. There are approximately 1.7 million Israelis currently living in poverty, with over 800,000 children going to bed hungry each night.

“This groundbreaking project builds solidarity with Americans and impoverished Israelis,” said Danielle Rubin, Project Director at American Friends of Meir Panim. “We are so grateful to Baltimore-based students from Yeshivat Rambam and Beth Tfiloh Dahan Community School for establishing this initiative, which is now a national event.”

Rabbi Sam Wach, Youth Director of the Ner Tamid Youth and Scouts stated, “It is exciting to go from restaurant to restaurant on the day of the event and see the people excited to share a meal with family and friends, knowing that doing an ordinary thing such as ordering a sandwich or omelet is going to provide funds to people with real needs in Israel.” 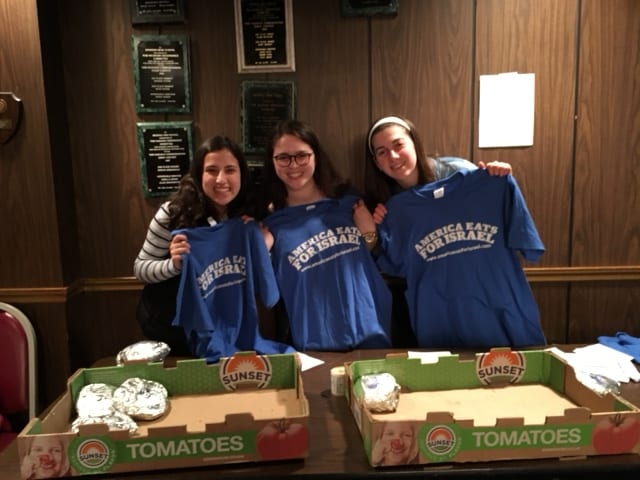 With the development of the project, students in multiple U.S. cities now recruit restaurants to participate. They then work hard publicizing the event and making plans to “eat for Israel” with their families and friends.

“Knowing that we are helping our brothers and sisters in Israel makes the program even more important and meaningful,” said Josh Wiener, America Eats for Israel liaison and sophomore at Hebrew Academy of the Five Towns and Rockaway.

Rabbi Yaakov Blau of Torah Academy of Bergen County explained, “Torah Academy of Bergen County strives to impart in each of its talmidim [students] a sense of communal responsibility and a love for Eretz Yisrael [Israel]. America Eats for Israel offers the students a unique opportunity to simultaneously fulfill each goal while enjoying themselves. We are proud to partner with Meir Panim in their mission to fight poverty in Israel.”

With the help of programs like America Eats for Israel, Meir Panim is able to provide nourishing meals and lifesaving support to thousands of children and adults across Israel. By simply grabbing a bagel, ordering lunch for the office, or taking one’s family to a delicious dinner, giving charity to Israel’s needy citizens has never tasted so good!