For some Survivors of the Holocaust, like a pheonix rising from the ashes, they were able to rebuild their life in Israel and accomplish the impossible.

Take Avraham Hershko, who fled to Israel with his family after they were imprisoned in an Austrian concentration camp. Today, Hershko is now a renowned scientist who won many prestigious awards including the Noble Prize in Chemistry.

Or even Israel’s Chief Rabbi, Israel Meir Lau, who was liberated when Amerian forces arrived at the Buchenwald concentration camp.

Somehow, luckily, these intrepid souls were strong enough to put their trauma behind them and start anew in God’s land.

But for some 200,000 Holocaust Survivors living in Israel, many have not been so fortunate. In fact, most have been forgotten by society at large.

Even worse, many are dying out and living their last days in squalor. In 2025, for example, only 102,000 are expected to still be living. In fact, for every day that goes by, 45 Holocaust Survivors die in Israel. Often alone and, almost always, poor.

Zuta is an example of Holocaust survivor forgotten by a country that prides itself on providing a strong safety net, A survivor of Auschwitz, Zuta can barely leave her home because she’s become dependent on her connection to a ventilator. Her inability to afford a $5000 mobile one has forced her to be a “prisoner in her own home,” according to Tablet.﻿ 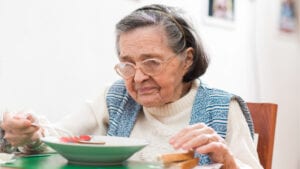 Zuta’s case is not unusual. Although Germany may have paid $78.4 billion in reparations, less than half of that money was actually earmarked for victims of the Holocaust. Even more alarming, according to a report issued by then-Welfare Minister Haim Katz, only 20,000 Survivors actually received the funds owed to them.

“The numbers clearly show how we’ve all failed—how the bureaucracy, the indifference of officials, and the proliferation of agencies that deal with this issue have produced a situation where Survivors go hungry and suffer from cold and neglect,” Katz told Tablet back in 2017.

In the meantime, Meir Panim has stepped in to help in ways the government can’t. By providing food and companionship to Holocaust Survivors, the non-profit organization has dramatically helped the most vulnerable members of Israeli society.

With its Restaurant-Style Soup Kitchens and Meals-on-Wheels, the organization provides lifesaving nourishment to Survivors who would otherwise go to sleep with empty stomachs. 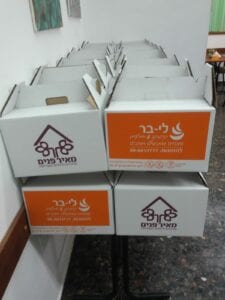 Meir Panim also runs a Holocaust Survivor Day Center in the southern Israel city of Dimona, which provides crucial aid and companionship to Survivors living in one of the most impoverished cities in Israel.

As the high holidays approach and Survivors who are given government assistance are forced to get by on the meager NIS 4,000 near $1,150 stipend they receive each month, their lack of means becomes even more noticeable.

That’s because as the country is inundated with blessings for a fruitful new year surrounded by loved ones, many Holocaust Survivors are alone and hungry.

This is why Meir Panim has launched a special campaign to help Survivors feel a little less alone during these holy days. In this campaign, Meir Panim will match every donation it gets throughout October. Dollar for dollar.

This may not seem like a lot of money, but to Holocaust Survivors every shekel counts as they struggle to pay for food, shelter, and medicine to stay alive.

The campaign hopes to raise $250,000. Meir Panim plans to stretch that quarter of a million dollars in various directions. From stocked pantries, therapeutic companionship, socialization, and enriching programs, it is determined that 5780 is a year marked by joy, not sorrow for those whose spirits desperately need to be lifted.

75 years ago, Rabbi Naftali Stern was imprisoned at the Wolfsberg forced-labor camp. His Rosh Hashanah service was written from memory on torn cement bags. Despite having nothing, he led a congregation in prayer.

“We prayed on Rosh Hashanah and the service was lovely, the service was good – to the extent that one can say that…. The entire service lasted less time than we do it today,” he recalled, according to Yad Vashem archives.

Today, Holocaust Survivors have the freedom to pray but are not always provided with the means to do so.

This new year, help Meir Panim allow them to re-open their conversation with God while being tucked away in a warm home with a full stomach.