On the eve of the Jewish holiday of Sukkot (the Feast of Tabernacles), the Hoenlein family gathered in the southern city of Kiryat Gat at Meir Panim’s “Largest Nutrition Center in the Middle East” to memorialize Sander Bak, Malcolm Hoenlein’s son-in-law, who tragically passed away a few months ago at the age of forty.

The timing was especially appropriate, as Sukkot commemorates God taking care of the Jewish people in the desert for forty years, providing for their every need.

Hoenlein is best known as the Executive Vice-Chairman of the Conference of Presidents of Major American Jewish Organizations, the coordinating body on international and national concerns for 52 national Jewish organizations. He has spent much of his life meeting with world leaders and Jewish communities to develop and improve public policy. However, Hoenlein seemed to appear most comfortable, if not emotional, at this gathering, surrounded by his family and friends.

With Bak’s passing, his wife, four children, and extended family and friends wanted to capture his essence at this modest memorial. As Malcolm Hoenlein stated in his presentation, “Dedicating the Meir Panim kitchen to Sander’s memory is an appropriate gesture. Sander was a person who sought to warm people’s hearts and satisfy their needs. This kitchen will warm the stomachs of thousands of hungry children and adults throughout southern Israel and let them know that they are cared about. Through these acts of chesed (giving), Sander’s memory will live on forever.” 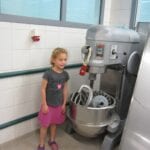 The Meir Panim Israel Nutrition Center will make 30,000 fresh meals a day for distribution. Workers and volunteers will work three shifts around the clock to assure that the poor and homebound receive high-quality meals on a daily basis. The Center will also prepare specialty meals for people with dietary restrictions, such celiac disease.

American Friends of Meir Panim board member Perry Davis and his wife Marjorie, long-time friends of the Hoenleins, attended the dedication. Davis said, “Three times a day we are commanded to recite Psalm 145:16, which speaks about God satisfying the needs of all living things. We know that God is the provider. Yet, everyone grasps that the way a mother shows love is through her food. By partnering with Meir Panim we join God in assuring that His children feel loved.”

Although all agreed that Hoenlein was the catalyst for taking the Nutrition Center from dream to reality, Davis pointed out, “Malcolm always refers to this center as a gift from ‘our’ family. Though he has never taken credit for his efforts, we thank him for making the important connections which created this facility.” 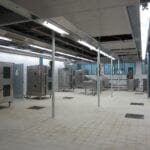 The Nutrition Center will combine forces with a well-known caterer to offset expenses. This will lower Meir Panim’s overhead costs by 45 percent, freeing up funds to further develop other important projects such as clubs for children and programming for the elderly and youth at risk. The Kiryat Gat building, was designed by top engineers with these future projects in mind, will house these activities.

Goldie Sternbuch, the Director of Overseas Relations for Meir Panim, highlighted the importance of the Nutrition Center with the announcement that former president of Israel Shimon Peres has promised to attend the facility’s opening ceremony.

Reuben Shnapps, Bak’s brother-in-law, shared, “There is a new phenomenon today known as the working poor. These are people who do everything they can to support themselves. Yet, they are unable to meet their family’s basic needs. Sander always kept in mind that we should strive to help all in need.”

“It is befitting that a plaque in Sander’s memory appear at Meir Panim,” added Meira Bak, Sander’s wife. “This place captures the essence of what he lived for, helping and feeding others. He often donated food and his time to soup kitchens.”

“A large part of the Hoenlein family was wiped out in the Holocaust. We say ‘Never again’,” said Hoenlein. “This means keeping every Jew safe, both in spirit and body. Assuring that the most vulnerable have what they need for their physical well-being is part of this pledge. It is not an embarrassment to have needs. It is an obligation on those who can help to assist those in need with dignity.”

“Every bite a person takes out of the 30,000 meals distributed is a merit for the person who donated it,” said Davis. “This is a huge amount of daily merits for those who support Meir Panim.”