One would think that Shavuot, the holiday commemorating the greatest day in the history of mankind, the date when God gifted the Jewish people with the Torah, would include critical observances to celebrate. In actuality, this is not so.

The Biblical holiday of Shavuot, May 20, commemorates the Jewish people receiving the Torah at Mount Sinai. Unlike other holidays, when we are tasked with specific actions relating to the holiday, there are only two traditions (not even Biblical commandments) followed on Shavuot.

Eating dairy is particularly unusual as the Talmud states that in order to truly enjoy a festival, one should include meat and wine at the meal.

The Sages provide several explanations for leaving the norm and enjoying a dairy meal on Shavuot. One thought is that before the Torah was received, instructions for the proper slaughtering of animals and preparing the meat in order that it be kosher had not yet been given. Therefore, pots that had been used before receiving these kosher guidelines could not be used. As many dairy items do not require cooking, dairy was eaten until God’s laws for kosher food could be enacted.

Another explanation is that Torah is compared to milk. Song of Songs 4:11 says, “Sweetness drops from your lips, O bride; Honey and milk [referring to Torah] are under your tongue.”

Ironically, while in many homes dairy foods are considered staples, most dairy products are particularly expensive in Israel. In 2011, the country’s “cottage cheese protests” made international headlines. Angry consumers found that companies had increased the price of cottage cheese by a whopping 45 percent over the span of three years.

Similarly, in 2014, it was publicized that the Israeli made “Milky” brand chocolate pudding was being sold for 33 percent less in Germany than it was in the Holy Land. Once again, Israeli consumers, whose salaries are notoriously low, were expected to somehow pay higher prices for their food.

In Israel, a small container of cottage cheese generally sells for about $1.50 as opposed to about $0.75 in America. This makes celebrating Shavuot in style difficult for struggling Israeli families.

“Around the holidays, Meir Panim provides prepaid food shopping cards and food boxes to struggling families,” said Danielle Rubin, project director for Meir Panim charity organization, to Breaking Israel News. “Not only is there an urgent need each day to feed hungry Israelis through our soup kitchens, we also try to give struggling families more festive holiday celebrations.”

In honor of Shavuot, below are two cheesecake recipes for you to try. In Israel, they would cost about $45 to make, an enormous sum for a struggling family. Please consider donating a cheesecake to a struggling Israeli family by giving here. 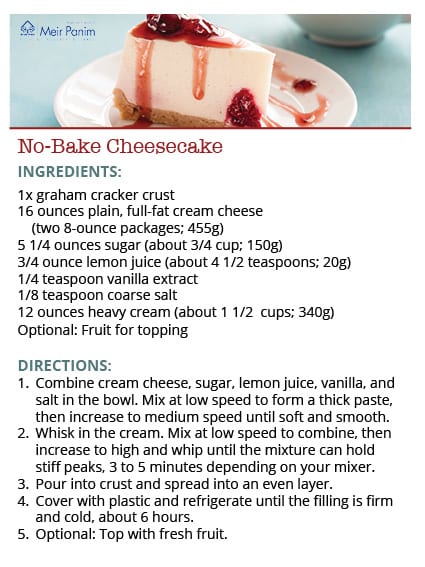