Jerusalem Day this year marked the 50th anniversary of the reunification of the holiest city in the world. Free activities in the Old City and surrounding areas included musical performances, a parade, a prayer service at the Western Wall and tours of different historical sites.

Israelis and Jews worldwide viewed the reunification of Jerusalem as a momentous event, if not a divinely orchestrated occurrence. But despite the city’s continued growth and development, there are still thousands of needy residents in the city.

Jerusalem has always been a city under siege, falling into the hands of many rulers and governm

ents for thousands of years. After the State of Israel was established in 1948, the Holy City was still under Jordanian control. And then, for six harrowing days in 1967, the very existence of Israel was again at risk when Egyptian, Jordanian, and Syrian military attacked the young country. Against all odds, Israelis were victorious, and along with the Golan Heights, the Sinai Peninsula, and the West Bank, Jerusalem was captured and once again safely in the possession of the Jewish People – after they had been denied access to the site of the Holy Temple for 2,000 years.

“The Temple Mount is in our hands!”

These were the famous words exclaimed by Commander Motta Gur upon reaching the Dome of the Rock. General Rabbi Shlomo Goren, chief chaplain of the IDF, heralded the liberation of the Western Wall by triumphantly sounding a shofar. Soon afterwards, Captain Yoram Zamosh hung an Israeli flag from the top of the wall.

When the war ended, much of the city was left in a state of disrepair. While Jews in the Diaspora lived in modern conditions with all of the common comforts of the Western World, many Jerusalemites received their household water from wells or street vendors. Food was also scarce in the Holy City.

In the decade following the reunification of Jerusalem the Israeli government made a concentrated effort to attract more Jews to move into the city. New housing projects were constructed, and waves of new immigrants were settled in Jerusalem. The city also drew ultra-orthodox Jews, who sought a holy environment when setting up their homes. However, finding work in a city that was relatively far from Tel Aviv and other central cities meant that the population as a whole was – and still is – less affluent than Israelis living elsewhere in the country.

In 2007, Meir Panim began its lifesaving work. The organization set up a network of Free Restaurants that feed people of all ages and ethnicities. In addition to the bustling soup kitchen in the Holy City, there are similar facilities in Tzfat, Tiberias, Dimona, Haifa, and Or Akiva. The clients who visit receive freshly prepared, healthy, hot meals every day. Everybody is served without question, and is treated with dignity, respect and warmth.

Thousands of disadvantaged people, including many Holocaust survivors, depend on Meir Panim for their only meal of the day. Today, Meir Panim serves over 390,000 hot meals annually, with almost half of those meals feeding hungry children. The soup kitchens, food packages, and food shopping cards that Meir Panim provides ensure that countless men, women, and children have enough to eat. 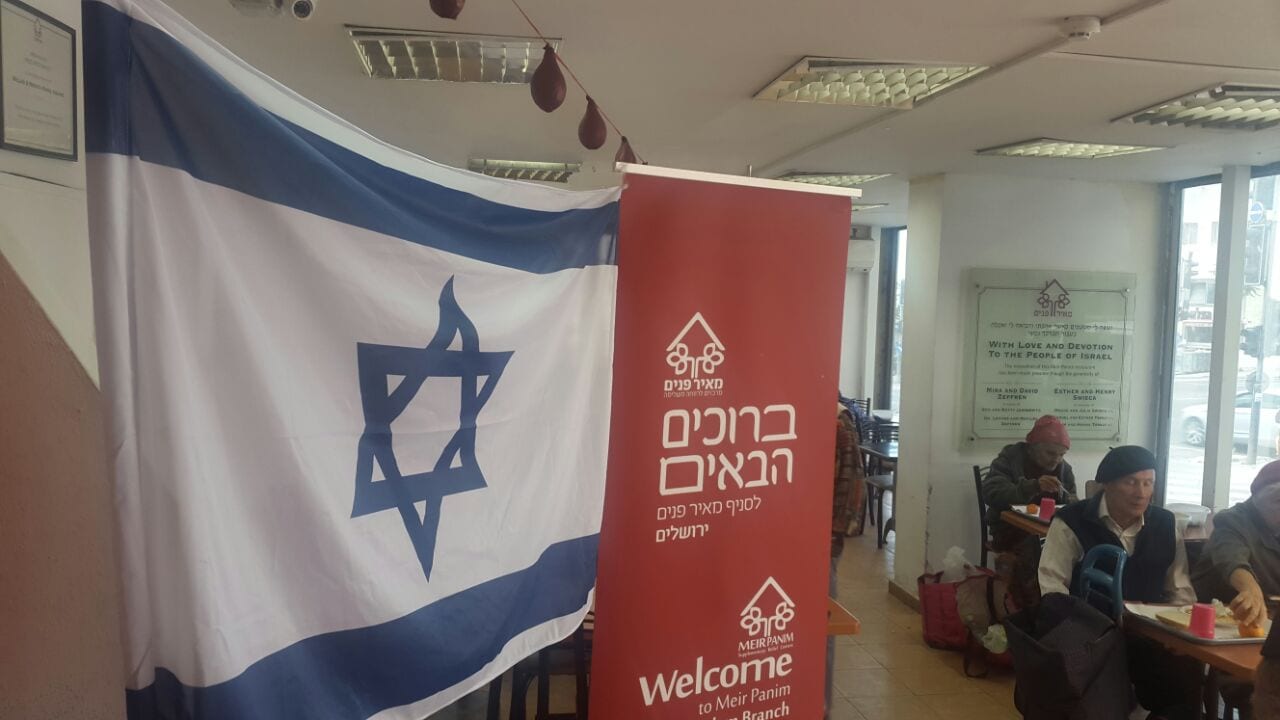 While living conditions have greatly improved since the times of British, Jordanian, and Turkish control, the city is still a work in progress and there is much to be done to help its residents. Jerusalemites came together to volunteer during the Six-Day War in makeshift hospitals to care for wounded soldiers and civilians, with people of all walks of life working together to ensure the survival of their city. Today, the same atmosphere of alliance still exists among the volunteers who prepare the food for Meir Panim. Senior citizens, prisoners undergoing rehabilitation, and national service volunteers stand alongside each other peeling and cutting vegetable in preparation for each day’s lunch.

On Jerusalem Day, Jews across Israel came together to celebrate their unending love for the Holy City. Meir Panim is working hard every day to ensure the well-being of the city’s neediest residents, making it possible for them to continue living in a reunified Jerusalem.