Meir Panim Update
A B'nei Mitzvah for the Ages
January 1, 1970

The following is a reaction from the parents of Zachary and Sarah: “Zachary and Sarah’s B’nei Mitzvah was a magical afternoon . The theme was clearly to raise consciousness and funds to help needy children in Israel for Meir Panim. It began right from the invitation where it stated that, “In fulfillment of the obligation to do good deeds and to help make a difference in the world, we are making a donation to Meir Panim to help feed the hungry in Israel.” The feedback we received from our guests was astounding- they were so excited to donate funds. The actual day of the simcha, Zachary and Sarah prepared songs to sing for their guests. They sing in beautiful harmony and when they got to their finale the crowd was truly touched.

The movie screens were set up around the room, the lights were dimmed and Zachary and Sarah started singing, “We Are The World”- the song about world hunger. On the screens were pictures flashing of children who were recipients of Meir Panim benefits. Their performance was very impacting and quite touching-it truly made a statement and the crowd of four hundred fifty people spoke about this simcha for weeks after. We hope that Meir Panim continues to benefit from other children’s efforts in the future as well- what a great lesson that Zachary and Sarah learned- children helping other children. Thank you Meir Panim!!”

The money raised at the B’nei Mitzvah was allocated to sponsor a Bar and Bat Mitzvah in Israel, with the remaining money allowing Meir Panim to feed thousands of hungry Israeli children!

Zachary and Sarah Blumner had also participated in the children’s choir at the Meir Panim Carlebach concert in 2006 at the Avery Fisher Hall in New York City. Their contribution and efforts to raise awareness and funds for Meir Panim has been a real awe-inspiring experience for everyone at Meir Panim. 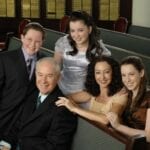 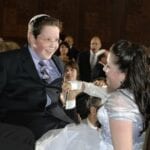